There’s nothing like a bit of sunshine for sitting in a cafe in London. Was running the edge of being overcaffeinated today after the Square Mile cupping but I’d been looking forward to visiting this cafe for weeks, so I wasn’t going to let that stop me! But let’s start from the top.

Back in early February a colleague of mine had mentioned a new cafe popping up (as they do) in London, somewhere in the Bank business district. At the time I was still working part-time hours at Prufrock (hence the cafe in question popping up in conversation, as part of a potential freelancing situation I could land myself in to make ends meet.) Unfortunately at that point I was relishing being unreasonably lazy and having the most free time to myself I’d probably had in my life up to that point (4 whole days a week?!), but still decided to follow Rosslyn on Instagram just to keep in the loop, thinking it might be interesting.

And boy, watching them buff their social media up pre-launch definitely got me excited. From before the soft launch their attention to detail was super-evident - everything from the hiring of the crew, to the fit-out, to even the nitty-gritty bespoke ceramic mugs (SUCH A SUCKER FOR NICE MUGS) was impeccably documented. Huge props to the social media team/organiser - as mentioned in the 2018 edition of the London Coffee Guide, Rosslyn’s dazzling debut in the new year was one anticipated by hundreds of speciality devotees, so I wanted to see it for myself. I’d heard plenty of good things about their collaborative cupping during the LCF with Colonna, having been unable to make it myself, so it was in the blazing midday sun that I made the short trek through bustling Bank to a small corner establishment across the street from Mansion House Tube. 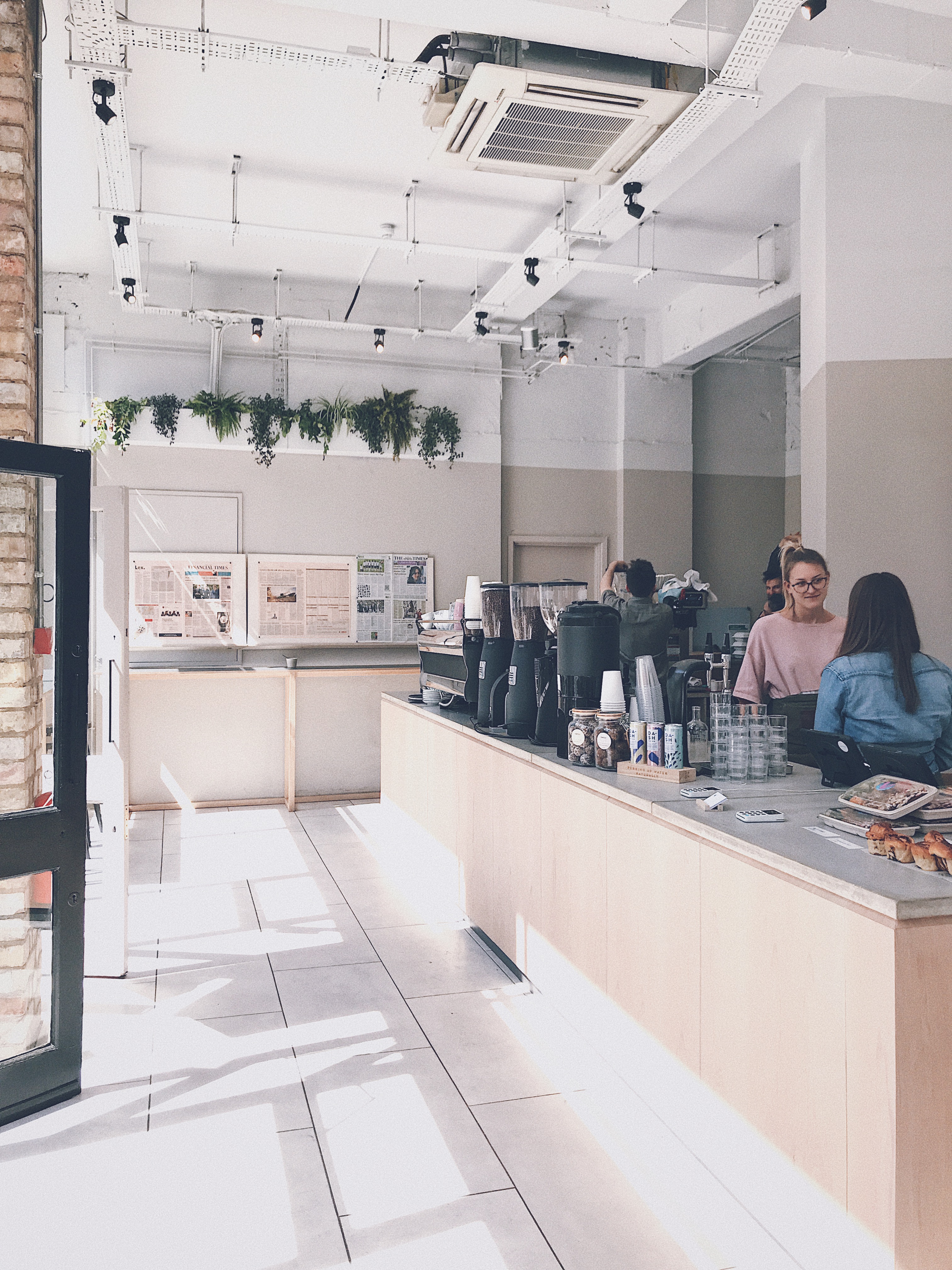 Earlier in the week the same colleague and I had been belabouring the fact that there seems to be a distinct lack of coffeeshops in London that actually live up to the general majority’s (perhaps mistaken) ideal of a cafe - a place to connect, to enjoy a good cuppa, to chill. Oftentimes a cafe in the city can deliver on perhaps the former two points, rarely the third; the pace of life in the city centre makes it nigh-on impossible to do that. Rosslyn takes that expectation and does away with it completely. I’d heard from friends who had been say that it was a busy little place, and yet expected something far more intimate and laidback from its social media; and somehow, somehow, that cognitive dissonance was inexplicably resolved once I stepped into the space.

It’s a businessperson’s cafe through and through, no bones about it. One of the biggest compliments Rosslyn deserves is its utter cohesion - the merger of the physical space, its ethos, and its business goals - and ultimately the sophistication with which that aim was executed. It knows it’s there to deliver fast-paced quality service and coffee to the people of the district, many of whom don’t have much time on their hands. This is immediately achieved through several structural leverages - the double tills, the in-and-out doors which direct crowd flow efficiently, the ability to interact with customers over the bar over the rapid delivery of drinks. There were five members of staff when I came in during a mildly busy streak (all baristas, no kitchen) - bearing in mind that it was still a tiny bar by most standards! But they were a superb team, each manning different stations but with a practised fluidity which belied the cafe’s actual opening age (6 weeks or so as of the date of this post!) 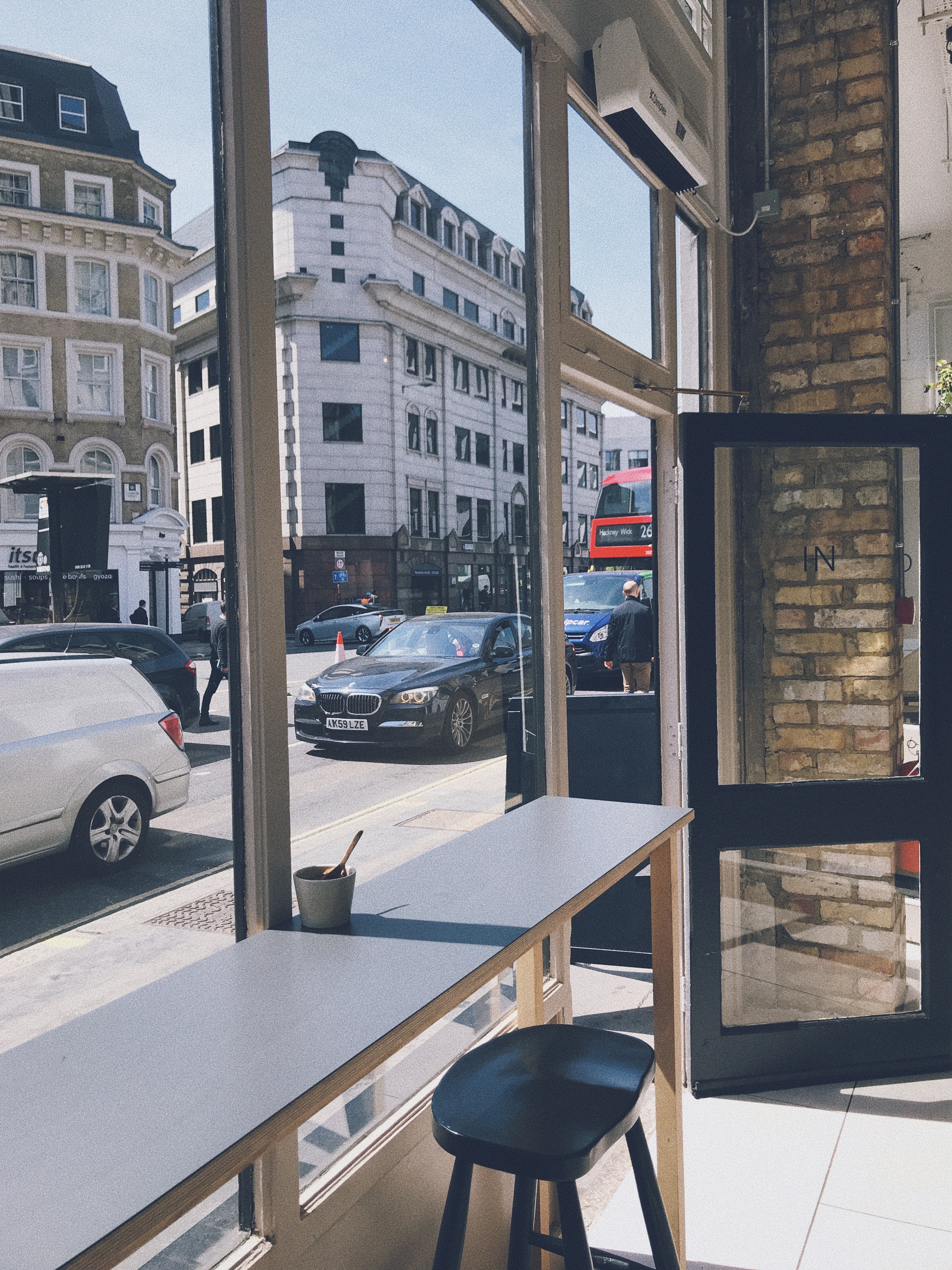 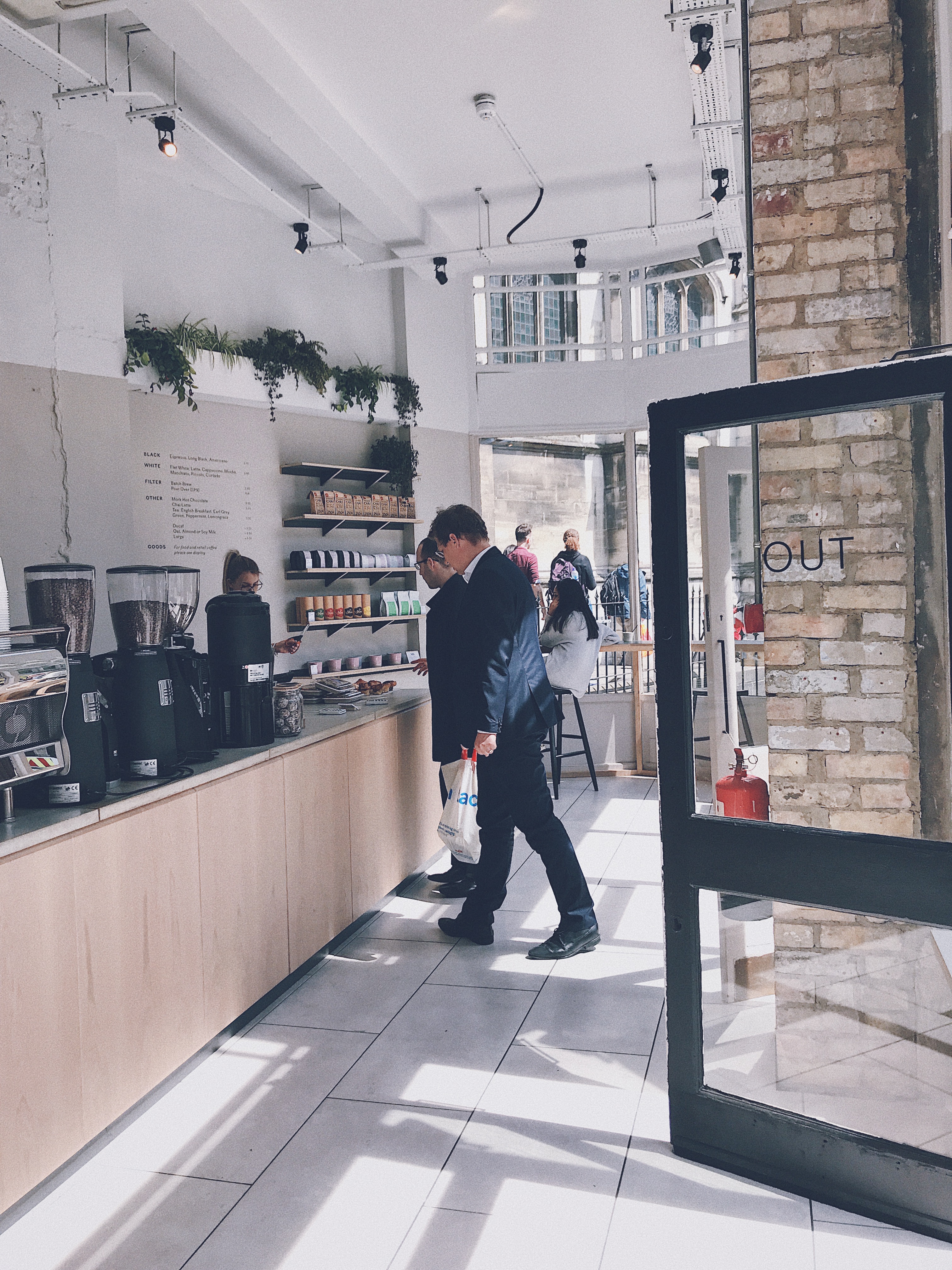 Furthermore, they have both batch brew and Marco SP9s, which both have their own strengths as standalone bevs, with the added advantage of the SP9 being able to deliver consistently higher-quality filters without the faffing-about actual manual brewing might engender. Near the end of the counter where the pick-up point is, there’s a noticeboard to which the daily papers were tacked up, which practically screamed attention to detail. 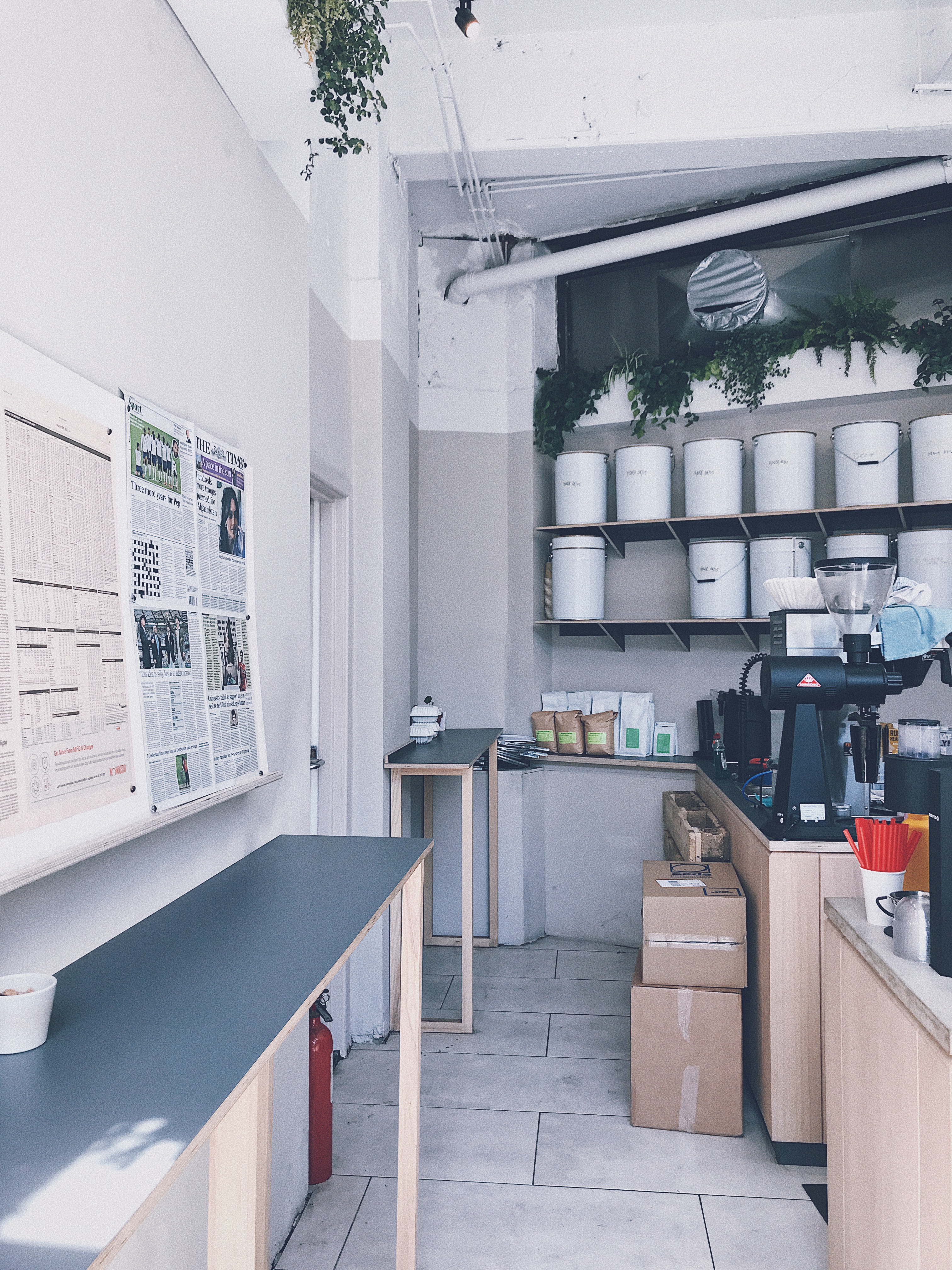 The design of the bar is simple and minimalistic (my favourite touch was actually the space carved into the top of the bar for an Acaia scale!), as was the pricing for drinks - blacks were £2.70, milkies were £3. How efficient is that to behold as a customer? The retail space is tucked into a corner away from the till, to minimise bottlenecks caused by perusals. There aren’t any charging-points (as I found to my chagrin, having wanted to sit there for a bit to type this up on site) but that makes sense - why would you, in such a small space designed specifically to funnel people in and out? There were only bar stools, or you could… simply stand. A wonderfully ergonomic and streamlined experience. The coffee selection was a mix of supporting local fare (Colonna in Bath, and Modern Standards in Essex) as well as an eclectic but exciting mix of international roasters. 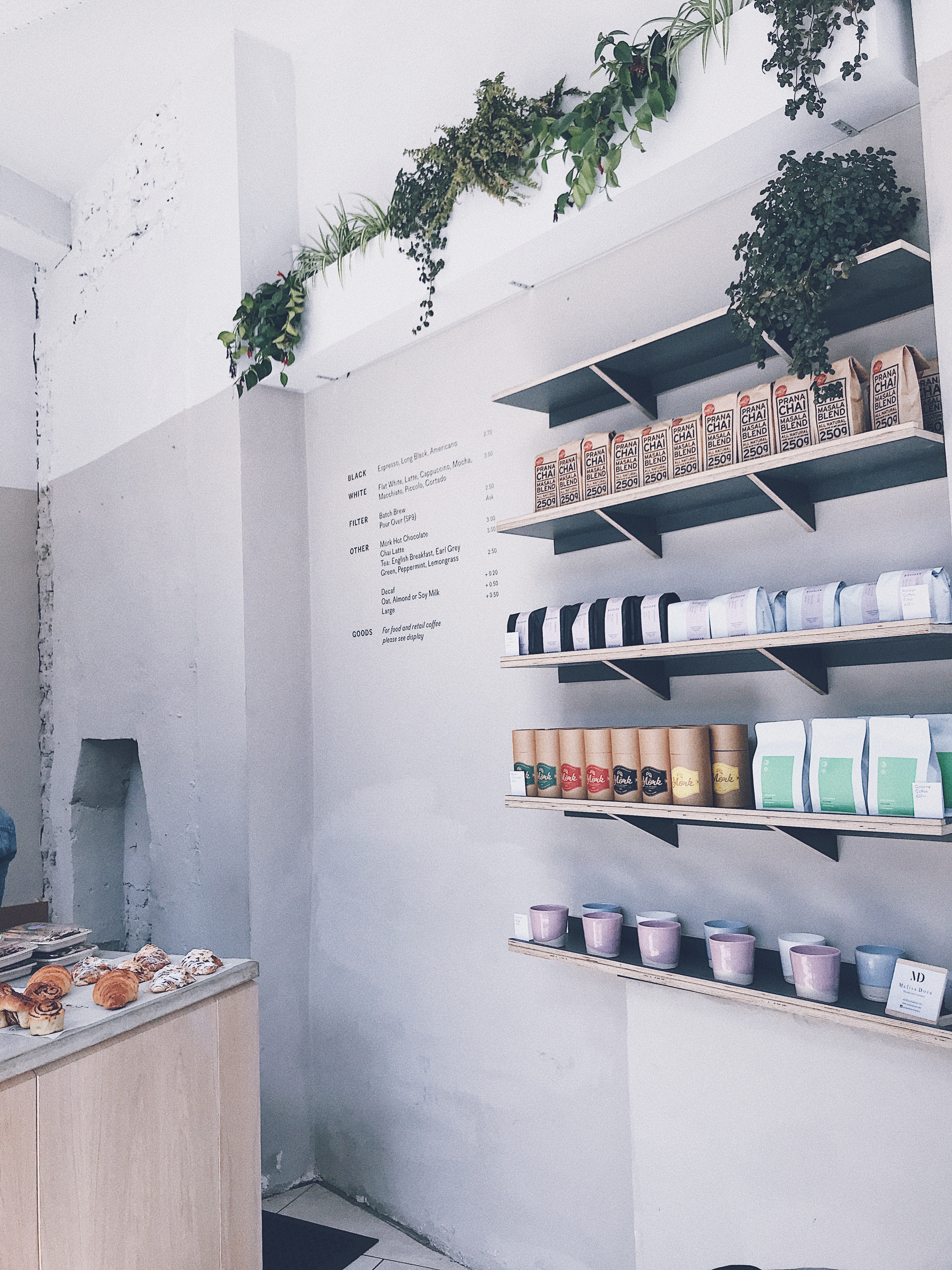 There were other things that I was definitely fangirling about - they have a beautiful machine, the Synesso MVP Hydra, one of the first to be spotted outside of the LCF 2018 - and my god, the fucking wood inlays, man. Wood inlays always get me. It was a gorgeous machine and, from what I understand from the baristas, a difficult beast to tame and understand; but fully worth the wait and the journey. They also have a Milkmate (a milk dispenser and jug-rinser rigged into the bar), which I hadn’t seen outside of Prufrock - but instead of boxes of milk like we get, which hold at the most 4-5 pints of milk, they’d rigged theirs up to a bigger fridge which could store up to 20L of milk - and when you’re banging out 40-50 coffees during a rush you don’t want to be caught unawares by the running out of the cow-juice. The clarity of thought and the experience of the owners/ cafe directors clearly shone through in every single aspect, and I can’t tell you how much of a joy that was to understand - that someone had looked at the space and thought “this is precisely how I want this to go, and we’re going to make it as easy as possible for us to achieve those goals.” 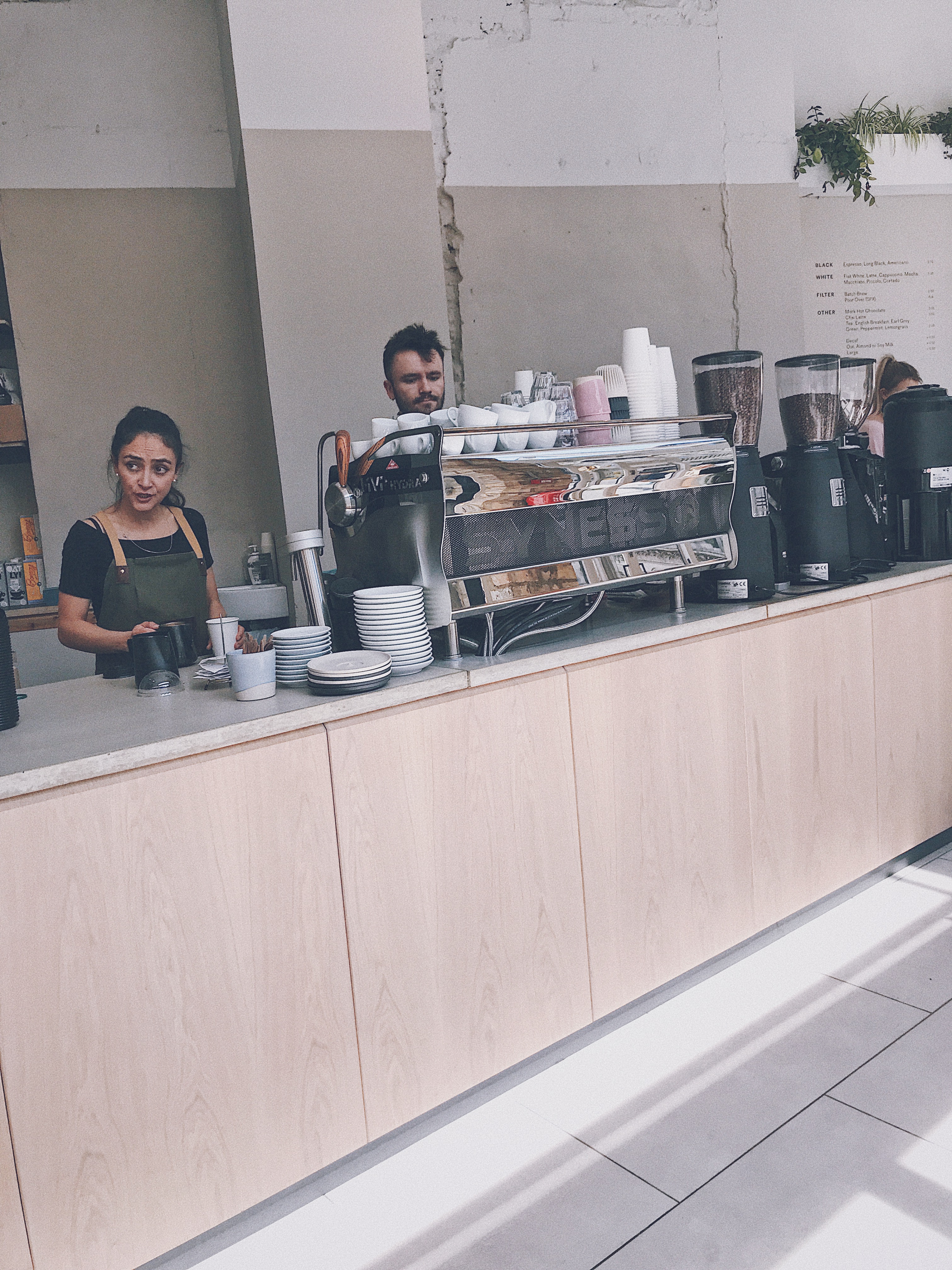 Other things definitely need to be highlighted and applauded - the well-oiled team (not physically) who were friendly and professional, but also good at utilising the downtime to prep for what would be their next rush. In a cafe like Rosslyn one perhaps always expects customers to come in waves - you‘re maniacally busy one moment, dead the next. I’d recently read a short Scott Rao thinkpiece on how cafes could learn from restaurants at integrating efficiency and professionalism into their routines, and how an ethos of urgency wasn’t actually that common in most third-wave coffeeshops etc… it was such a pleasant surprise then to watch the team hustle to do just that: topping up grinders, sweeping behind the bar, stocking up, bussing tables, and generally just having a good time doing it. There was plenty of grooving going on behind the bar to some classic cheesy tunes (gotta love the Guardians of the Galaxy soundtrack) but it’s such a quintessential part of the cafe experience, being served by a team that enjoys each other’s company. Coffee bars wouldn’t be the same without colleague banter. 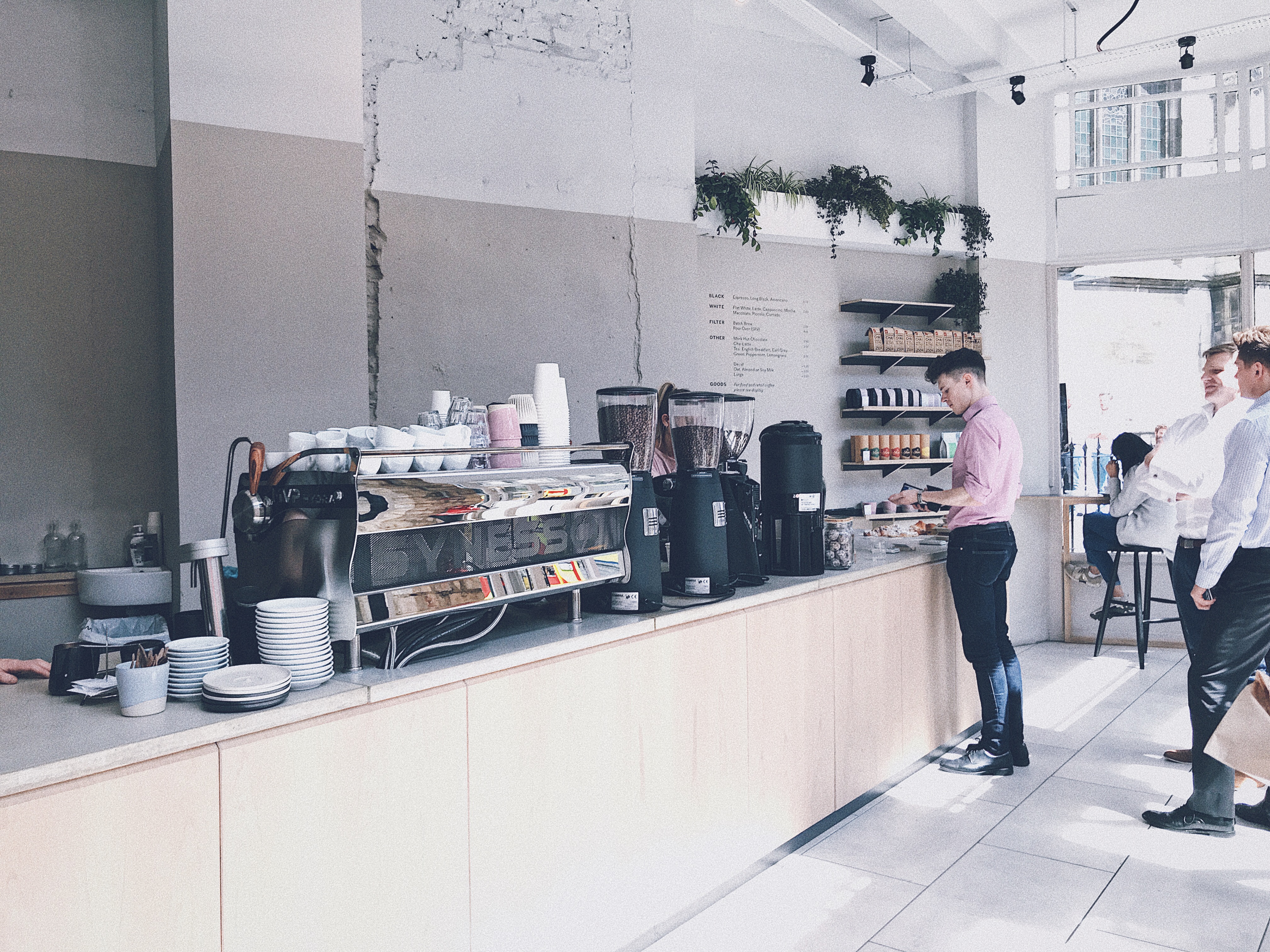 All in all, it was a wholesome coffee experience. I had a cortado and a Japanese-style iced filter, which the baristas were happy to make at my request despite it being off-menu. That kind of sums up my experience there in just about the most positive way possible - again, harking back to another recent Scott Rao - about good customer service generally meaning saying “yes” as much as possible without compromising safety or organisational mayhem. During the course of my visit I heard them agree to requests like “extra hot soy milk” or “sugar syrup” which some coffee purists might turn their noses up at, but it was just a joy to see Rosslyn flout certain unofficial industry expectations and put the needs of their customers first. Which is really what it’s all about, and something we all need reminding of from time to time!

If you’re ever in the area, drop by. Even if you’re not, it’s 110% worth a visit, simply to watch the world go by for about 20 minutes. Then you can have a banging iced latte with sugar syrup to go!