I was given this preface to start with, verbatim, from two of the capable three-person team that run Macintyre Coffee as smoothly as clockwork. No, seriously, Lucas grabbed my laptop and said this would sum the place up, with an excitable Nara wholeheartedly agreeing in the background. And yes, it’s a Sunday - or Sabbath Sunday, as Lucas likes to call it. And no, I don’t think the seats are that uncomfortable at all, although the plywood cooould do with some flat cushions…

I’ve always been a big fan of visiting ever since I started working in the Clerkenwell area; a lot of locals always drop Macintyre, along St. John St, into conversations about where to go for a good cuppa, almost too nonchalantly. It’s become such a fixture in the Angel scene that when you first clap eyes on it, it can be a little bit of a pleasant shock to realise how intimate it is. 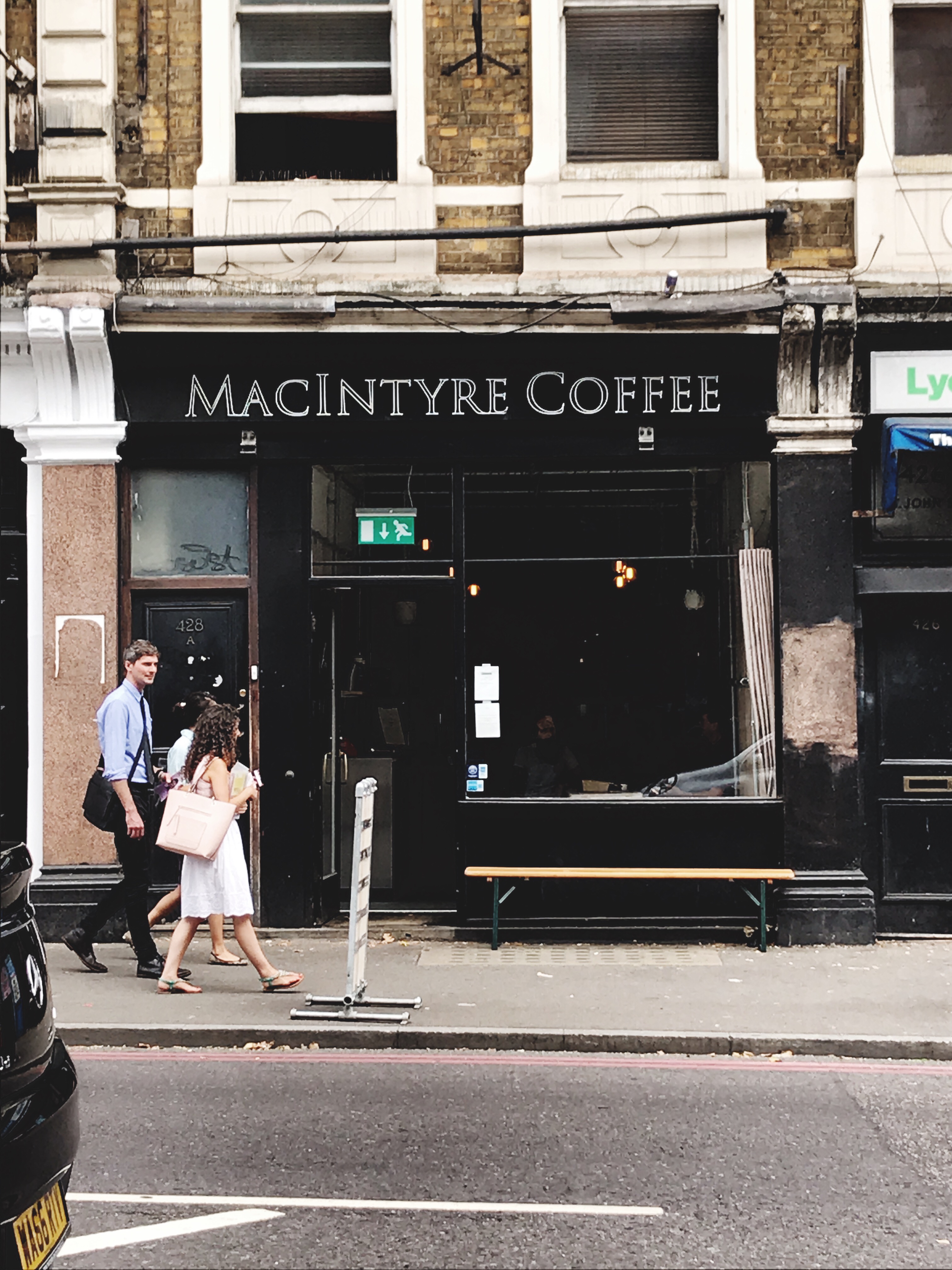 Disclaimer – I’m personally a fan of small cafes. The first place that I ever properly frequented when I started getting interested in coffee was in York, whilst I was still at university, and I always go back to it every time I regale someone with my café-owning pipe dream. It’s called Bison Coffee House, and essentially what’s so great about it is that (from what I’ve gathered) it’s this one dude who had a dream, and one day he knocked down the front room of his house, refurnished it into a coffee and vintage paraphernalia shop, and spends his days knocking about making good coffee (Hasbean) and the world’s best cinnamon and raisin, cream cheese and banana bagels. It’s cosy, there’s something like only 15 covers, all the locals frequent it so often it’s developed almost something of a cult following. His mom pops in to do the washing up sometimes in the kitchen round the back, he lives upstairs and doesn’t hire anyone else to my knowledge – and the only thing that could make this café more perfect is if they had a little black-and-white cat pottering around snoozing on every available surface. (Here’s looking at you, Bison. Get a move on.)

My point is, that kind of stuff is probably relatively easier to do in a small, sleepy university town. That kind of chill-out, zone-out café thing simply isn’t all that feasible in the centre of one of the busiest cities in the world. But that’s the kind of vibe you get when you step into Macintyre – that same ethos I discovered in Bison simply oozes out the walls here too. One of my closest friends, Lucas, started working here at the start of the year, and it always cracks me up how much we both seem to echo back to each other how much of a gem this little place is.

For a start – the design is remarkably ergonomic, and is keenly focuses on delivering excellent quality coffee, with investment in the tools that do the job. A small fangirling point is the metal scaffolding installed in the premises by the owner, Alex Macintyre, when he first opened the shop– which supports all of their lights, sound system, macramé plant holders and stock shelving to boot. To some it might look slapdash or casual – to me, it’s like enjoying a good inside joke that only someone who’s worked in enough cafes where the infrastructure actively works against them will spot, tucked away in the minimalistic décor and the clean lines of the open bar. I’m sat on a plywood bench that lines one of the walls, and (to no one’s surprise by now, really,) it doubles as storage system for takeaway cups and other miscellany (I had a peek.) It’s neat and unpretentious. It tells me there’s more to expect from a place that doesn’t mess about with facades. When they’re closed, they draw a simple linen curtain across the doorway and just… shut the door. It’s a very elegant thumbing-of-the-nose at larger establishments, perhaps. 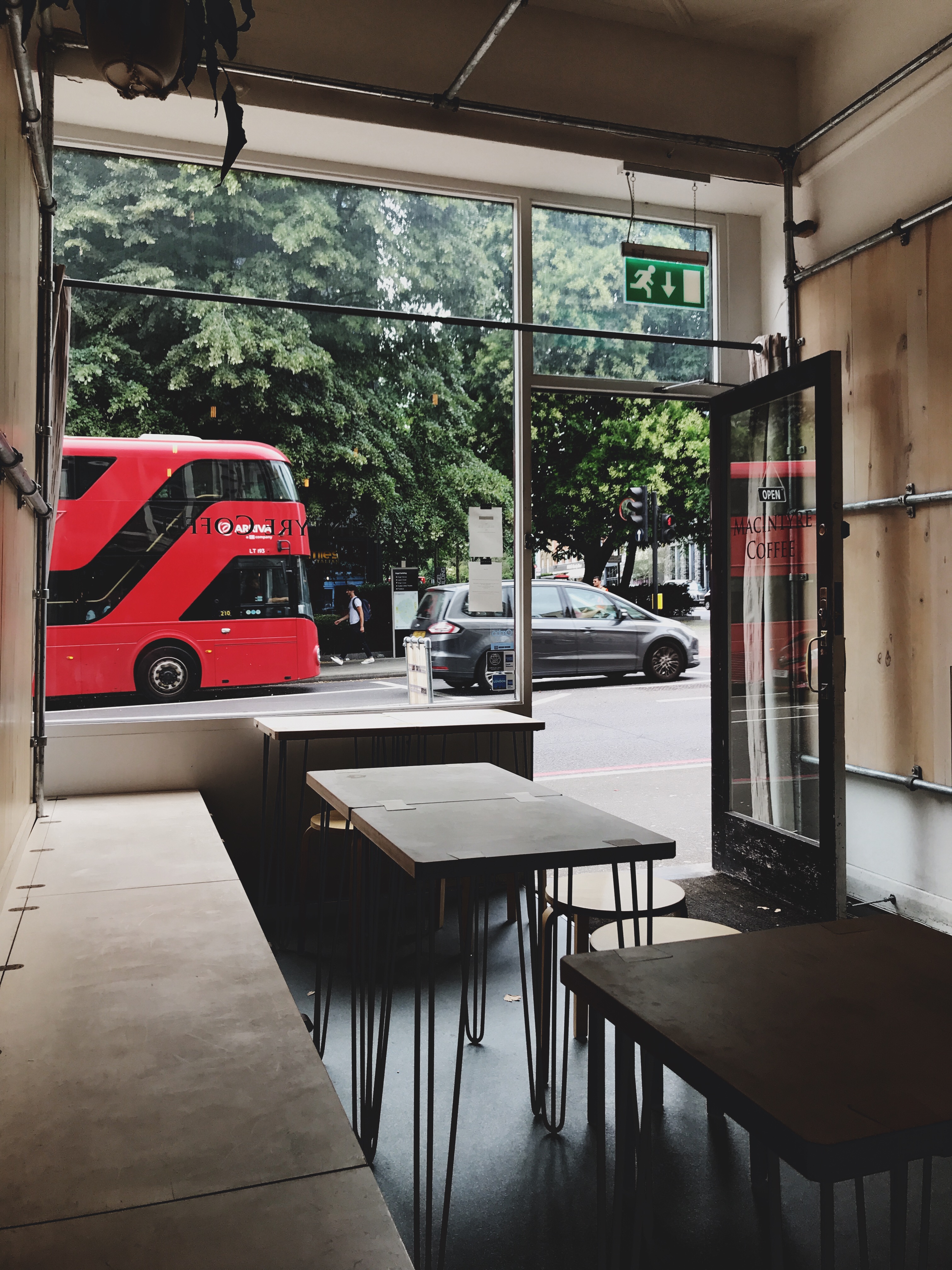 Their focus on paring things down to the essentials is seen in even the staffing patterns and operational hours. There are (at least) two members of staff present in the shop on any given day – one on the till and on any food orders (during the weekends), and one on the coffee. That’s it. The shop is open 7.30am – 4.pm, with the open and the close taking only half an hour either way. Today it’s Nara and Lucas, while Alex is away. They manage to whip up a banging scrambled eggs with nduja on foccacia, and an avocado with whipped feta. Nothing fancy, but they go as far as to give me a WHOLE avocado. In London that’s like having a triple portion when you were only expecting half. What a bargain! 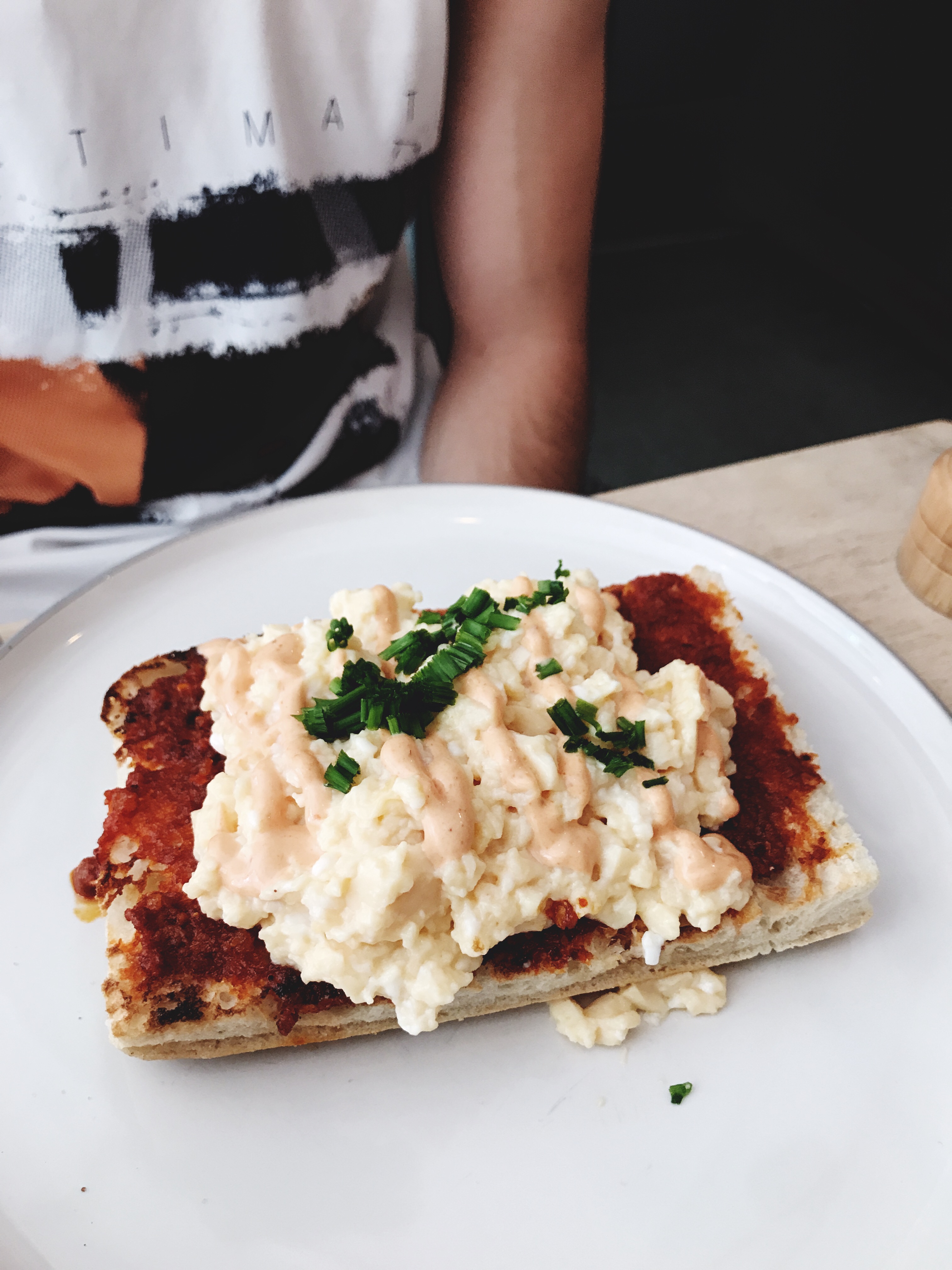 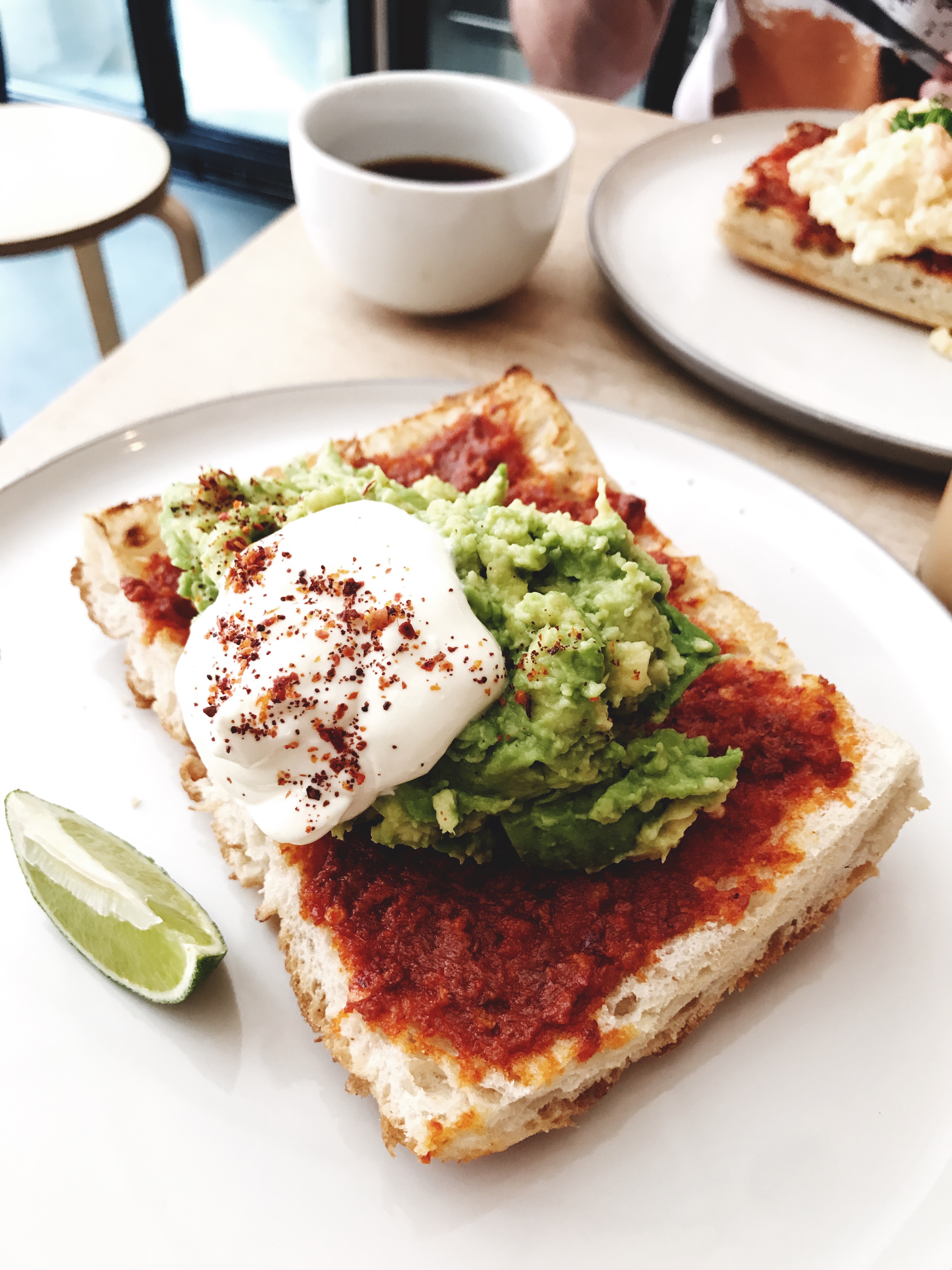 They’ve got all the trappings of a quality specialty coffee shop – a Modbar, an EK43, even a Puqpress, which sets them above a good portion of cafes here in the city. This is where things start to get truly interesting. Their EK43 has a Dosing Tool Mod, thereby eliminating the need for the usual Mythos or Mazzer. With a decent range of drinks – the usual espresso-based, along with a cold brew in the summer and a solid batch on offer daily – I asked the team if they’d ever found it a struggle with boulders and fines, what with (probably) having to switch between espresso and filter drinks on a regular basis. “It’s not much of a problem,” Lucas admits. “I mean, we don’t do individual manual brews, it’s just batch, which means that we dial that in at the start of the day, and at points during the day when we need it; and then at the end of the day we grind for our cold brew concentrate.” The way they see it, it’s like killing several birds with one stone – it makes it the focal point of your open bar while utilising precious bar space well, while still ensuring quality in every coffee that goes out. There’s even a personal modification Alex carved into the counter – 4 stable portafilter holders that sit snugly in front of the EK43. They’re a tidy way to store portafilters during lulls, and are also reinforced and stable enough to tamp on (back in the pre-Puqpress days.) 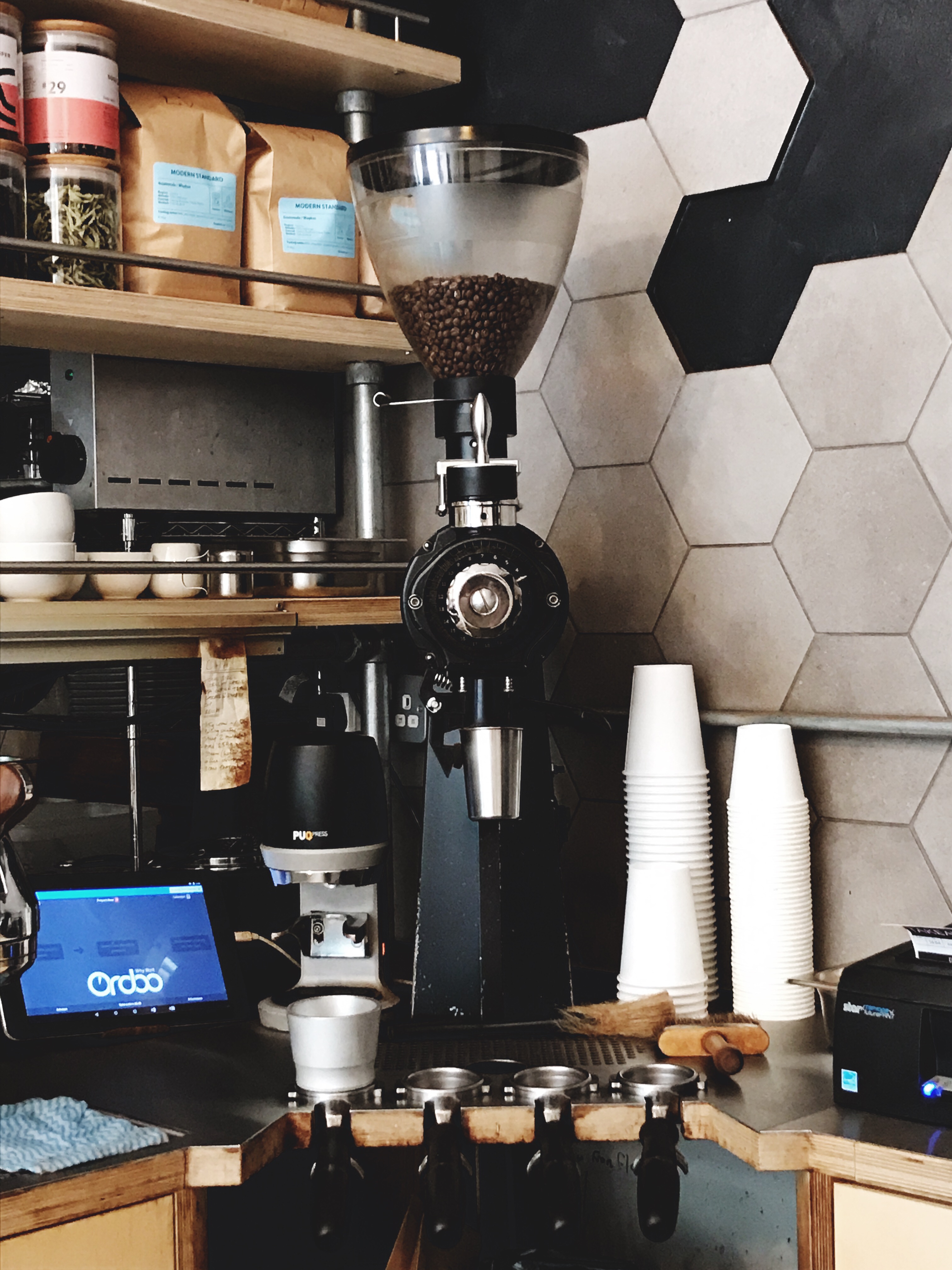 To the left of the EK is the metal scaffolding shelving unit and the two-group Modbar which the team tells me took a bit of getting used to in the beginning, but is a sleek option for cafes that perhaps accommodate for a low-to-mid volume capacity. Macintyre Coffee has its busy days and its queues out the door, Lucas tells me, but it never overwhelms the infrastructure. Most notably, the Modbar’s pre-infusion and full-infusion options, both manually operated with the classic wooden paddles, allows for a better connection with the espresso when you’re pulling it – and it’s always a treat for the customer on the other side of the bar, given that Macintyre has designed its open bar almost specifically for customers to feast their eyes on all of the coffee paraphernalia on display. 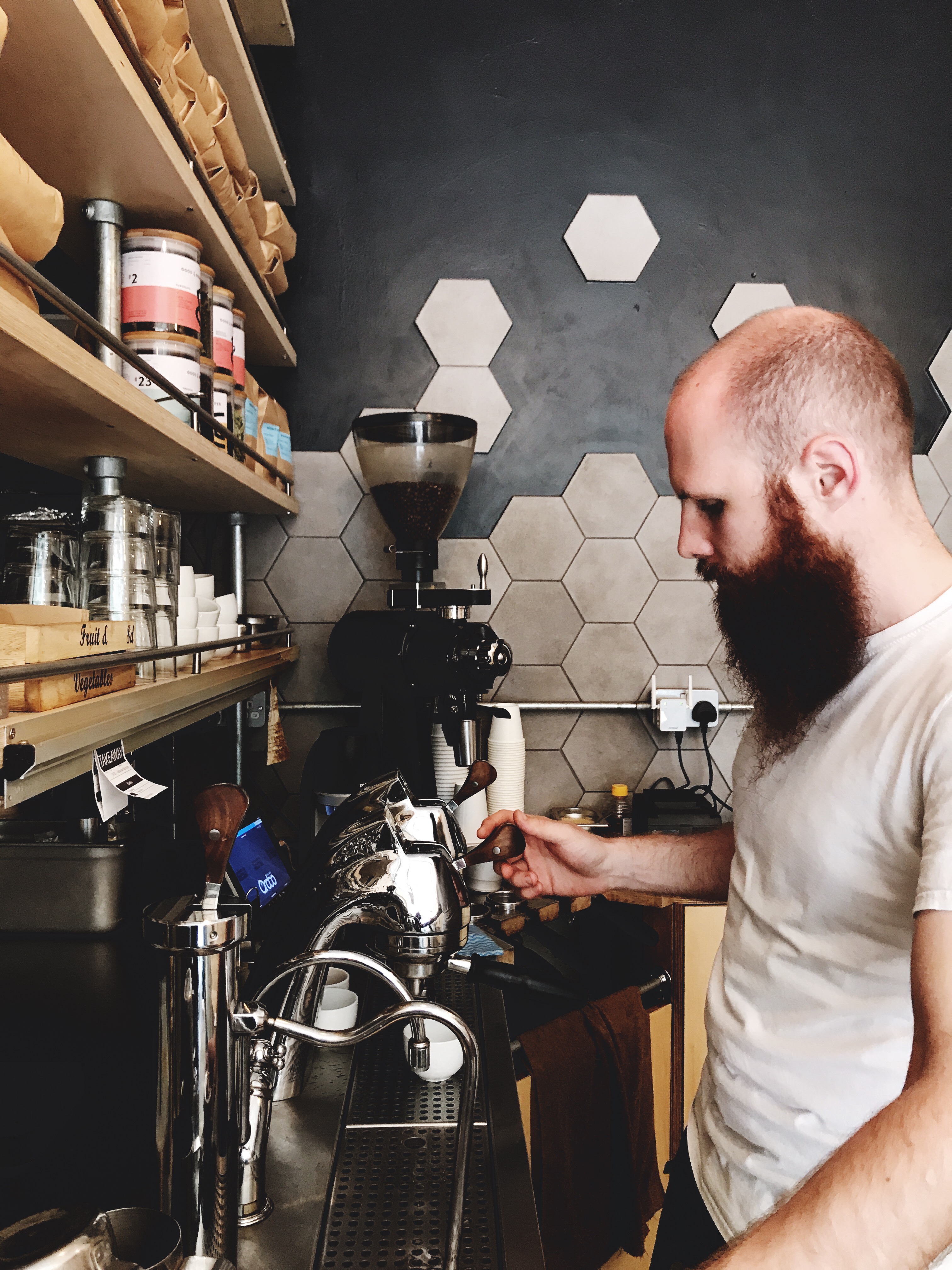 Further evidence of the humbling and inspiring ethos that is at the forefront of all that Macintyre do is their open support of temperature-sensitive equipment – most notably the Modbar and the 3Temp Brewers. “Before we started working here, we hadn’t really internalised just how much of an impact temperature has on the taste of your coffee,” Lucas says. “Honestly, we rely so much on automated programming – take your La Marzocco Linea PB, or your Black Eagle or your Synesso – a lot of these machines are programmable, and temperature isn’t usually at the forefront of the barista’s mind when they dial-in in the morning. Most mid-level baristas tend to only default to toying with the grind and yield, and occasionally if their baskets can allow for it, dose size. Temperature almost seems to be an afterthought for espresso-based drinks, more than they are for a manual brew.” But with the Modbar dials, temperature of the coffee at different stages of the brewing process is a whole new factor to play with - and be responsible for. 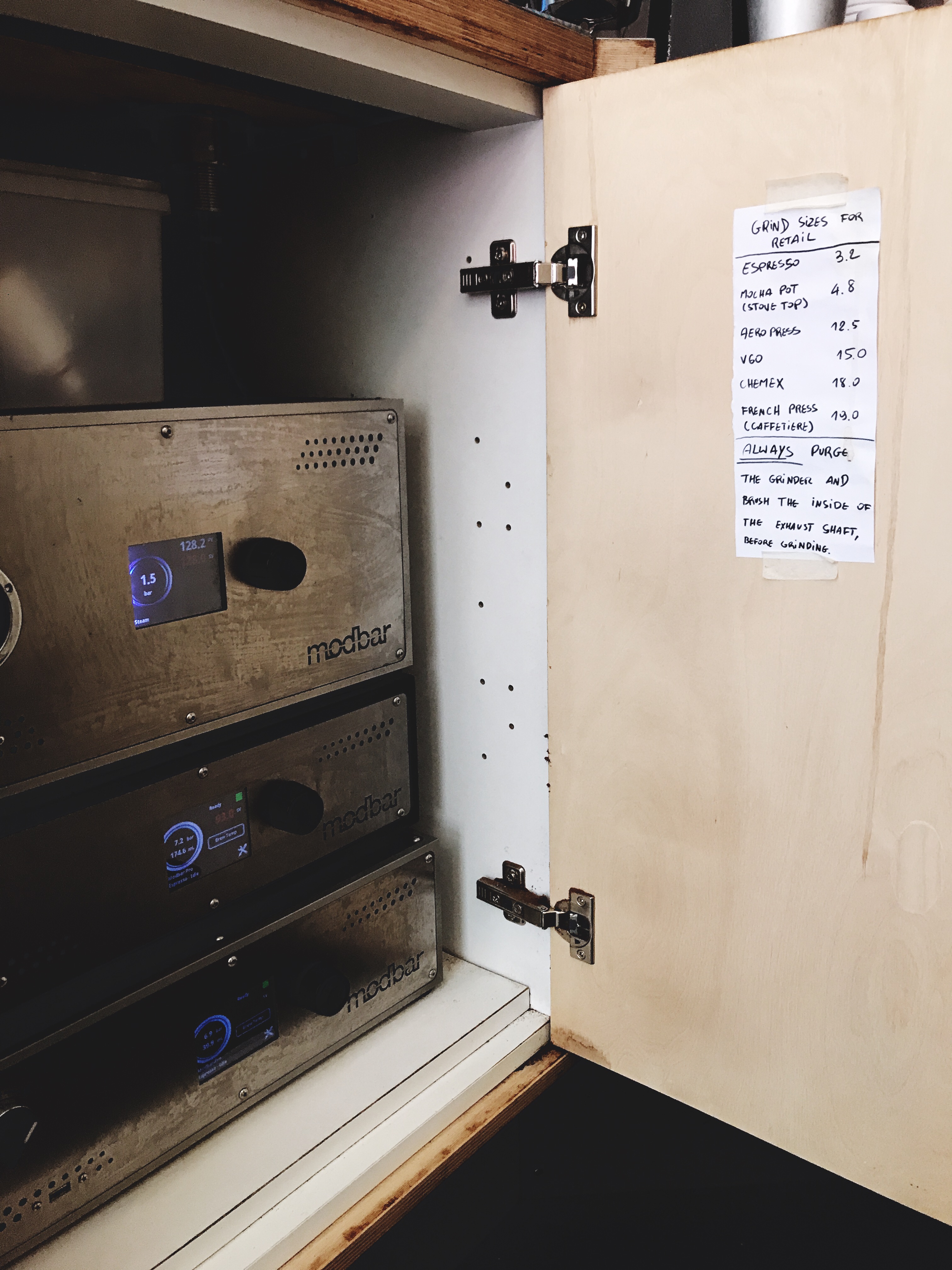 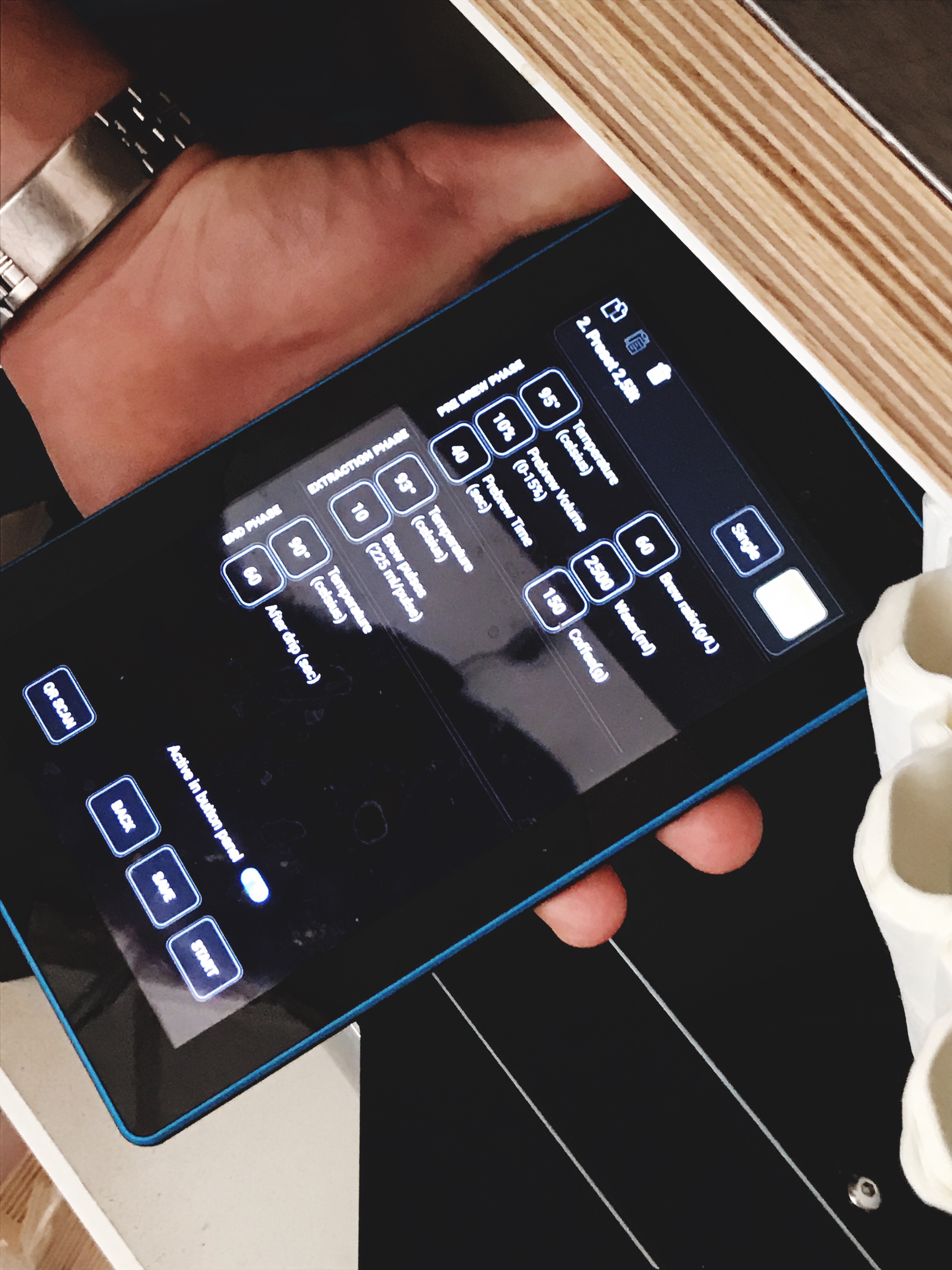 But with the Modbar and 3Temp Brewers, it almost seems too easy to play around with that information just for giggles – and Lucas assures me that there’s a keen emphasis on experimentation and trusting your senses because of it. “Honestly, working under Alex has got me questioning everything I thought I knew about working in specialty,” he admits, a little sheepishly. “I mean, the dude started out in this line of work back in the day when refractometers, Puqpresses, and scales weren’t even a thing. Today we’re slaves to the very technology we claim is helping us make better coffee more consistently, but he’s taught me that at the end of the day you can trust your palate. You’re hired to do this job because your palate is trustworthy. So you should, I mean, use it.” In the same breath he’s as enthusiastic as a child with a new toy on Christmas morning when he demonstrates the flexibility of the Modbar temperature dials, and the sleek 3Temp app used to control (individually!) the temperatures at pre-brew, full-brew and end-phase. “This creates loads of room for experimentation,” Lucas says. “It’s a real game-changer.”

And at the end of the day, this is where it’s at. Using your technology well, but never letting it lead you by the nose. Always questioning practices and being able to justify why you do what you do as a barista so that you can utilise your tools with discernment and to fullest effect.

Macintyre serve Modern Standard coffee, a roastery based in Tilbury, Essex. When we visited I decided I wanted to go off the beaten track, opting for a coconut cold brew whilst Luke went for the Ethiopian Konga batch brew filter. Decidedly tasty on both counts! Luke had good fun getting the tasting notes (citrus acidity, black tea, floral.) I hadn’t had a proper cold brew in ages, and Macintyre are currently using the Guatemalan Waykan. Plenty of milk chocolate and orange acidity, though the coconut milk had a bit too much stage presence in the glass… 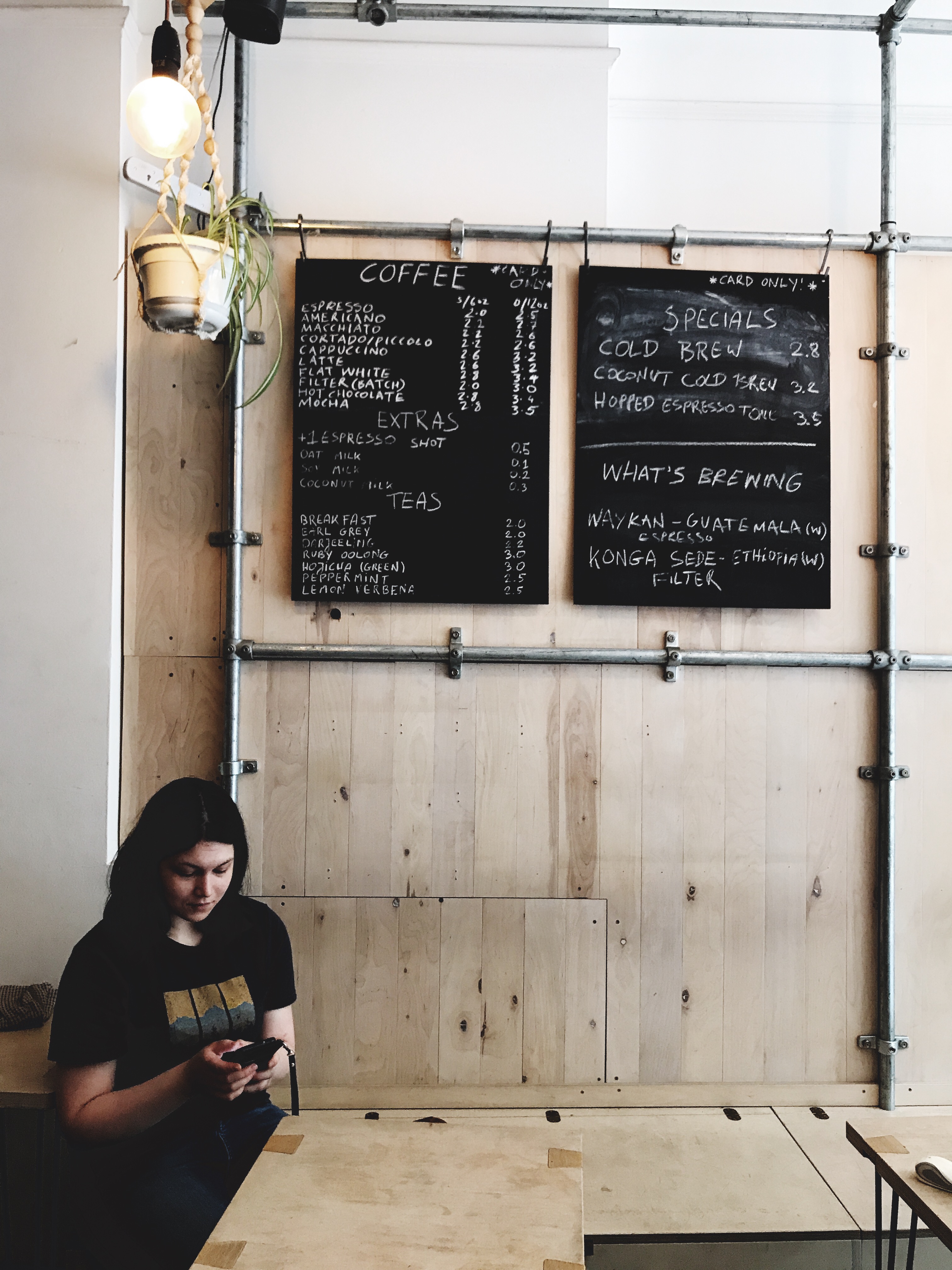 The thing I realised most about frequenting that shop is that… there are no hard-and-fast rules. Everything seems okay. Try something new. Do something you were told not to do. Question the limits of what is acceptable – because honestly, we’re still finding our feet as an industry. The people who made the rules are themselves figuring it out, and often doubling back on opinions they had years ago. No one is going to judge you for wanting a coffee with an alternative milk (and truth be told, I fucking LOVE anything coconut-related. Grew up with that shit.) No one’s going to shame you for wanting a cold brew – after months of making iced filters to order god knows I miss a good cold brew concentrate that you can whack up and store in the fridge overnight that’ll last for days.

The main takeaway from all of this is that – it’s possible to be a small coffee shop with a concrete customer base, dedicated to making what is widely and resoundingly acknowledged as excellent coffee, without having to shout it from the rooftops. Without the need for accolades, though in my opinion Macintyre bloody well deserves one. Its questing and intrepid spirit is plain for all to see, which frankly makes for a very enjoyable coffee experience on the whole. Always, always keep your eyes peeled for the place with the inside joke written into its very walls. It might help you appreciate the secret of designing and running a well-oiled coffee shop.